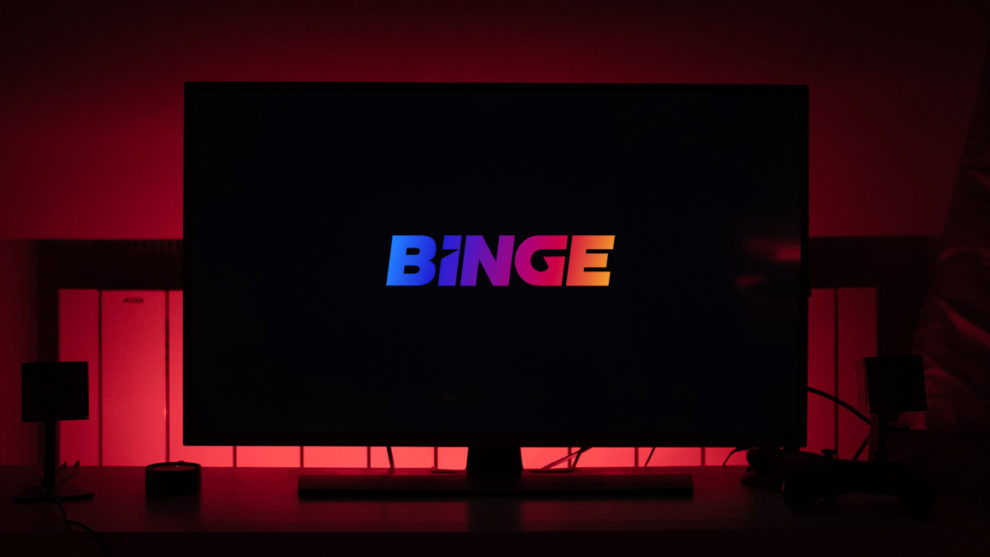 With one of the biggest libraries of TV shows and movies around – including exclusive access to the acclaimed HBO library – Foxtel’s been delivering premium entertainment for decades. With low-cost streaming services now being the go-to for millions of Australians, Foxtel made a well-timed move into the streaming world in mid-2020 with BINGE. Designed and run by the Streamotion team that also operate sports streamer Kayo, BINGE delivers premium TV shows and movies, at home or on the go, for a low monthly price.

Streaming services have seen massive growth in Australia since the launches of Netflix and Stan in 2015 – an easy, low-cost way to get access to ad-free, on-demand entertainment without having to mess around with installations or contracts. The challenge that Foxtel faced was coming up with a streaming product that could go toe to toe with the dominant players – and that’s where BINGE came in, the result of years of development and planning.

With access to almost all the Foxtel content library, BINGE brings a huge range of TV shows, docos and movies to streaming fans at home or on the go. That includes the HBO library of shows and movies, meaning that now there’s a streaming service that can give you your Game of Thrones or Westworld fix, as well as the latest HBO shows like The Undoing, Chernobyl and Lovecraft Country. But that’s just the tip of the content iceberg – you’ll find favourites from the BBC, FX and many more, along with movies from all the big studios.

BINGE is available on almost all popular streaming devices – including Apple TV, a first for a Foxtel product – as well as smart TVs, phones and tablets, and of course any modern web browser on a desktop or laptop computer.

If you haven’t been keeping up with the many TV series that HBO has been making over recent years, you’re already going to find yourself in TV heaven as soon as you load up the BINGE app. The US network that redefined premium TV drama has almost all of its massive library of shows ready to stream on BINGE, and that’s just a part of what’s on offer.

The idea with BINGE is, as the name suggests, to get you involved with TV you can devour at whatever pace you like, and so there’s plenty there to choose from – not just drama, but also comedy, docos, reality TV, lifestyle and movies. CompareTV has a great page listing TV shows and movies on BINGE so head over to that site and check it out.

Many of the biggest TV series of all time are right there on BINGE ready to watch, with HBO’s library a big draw for many – but there’s also plenty there from FX and FOX, the BBC and of course Foxtel’s own productions.

It’s not all about serious drama TV, though – comedy is still king, and BINGE has got tons of it ready to stream, to help make the week feel instantly better.

Lifestyle and Reality on BINGE

If you’re looking for something a bit more down to earth, there’s plenty of it to find on BINGE as well – from the most popular reality shows to lifestyle TV you can kick back and enjoy.

With a massive movie library to draw from, BINGE is adding new movies to watch every day – both fresh releases and classics that you’ll want to watch again. The available movies are constantly changing, making sure there’s always plenty new to watch for all tastes, from blockbuster action to period drama and classic comedy.

How much Does BINGE Cost?

With so much sought-after content that was previously exclusive to Foxtel, the cost of subscribing to BINGE is a welcome surprise – it starts at only $10 per month for unlimited access to everything that’s on offer. That’ll let you stream in SD (standard definition) on one device at a time – perfect if you’re only planning on watching on your mobile phone on the go.

For those watching on modern TVs, though, you’ll want the $14/month plan, which enables high definition streaming and lets you watch on two devices at the same time. That’s very much the “sweet spot” plan, giving you full picture quality no matter which device you watch on. If you’ll be watching on a smart TV or via a streaming device, head straight for this plan. This one’s also the default and only option if you choose to subscribe via Apple’s iPhone, iPad or Apple TV.

The third option at $18/month adds the ability to stream to four devices at once – making it perfect for families – but otherwise this plan has exactly the same picture quality as the $14 plan.

Just like with other streaming services, there’s no lock-in contract of any kind, and you can try out the full service for two weeks completely free to see if it’s for you.

How Do You Get BINGE?

Getting started with BINGE is quick and easy – all you need to do is sign up for an account either on the BINGE web site or via one of the device apps. Because BINGE is run by Streamotion – the company behind Kayo Sports – you will want to sign up using the same username and password that you already used for Kayo if you’ve subscribed to that service. This is because your mobile number – needed for setting up BINGE – is tied to that Streamotion/Kayo account.

Once you’ve logged in, you’ll be invited to choose the BINGE plan that works best for you, after which you’ll be able to start streaming right away, with the first two weeks on any plan being completely free for first-time BINGE customers.

One exception to this is on iPhone, iPad and Apple TV, where you can pay for your BINGE subscription via your Apple iTunes account. If you’re subscribing that way, there’s only one plan to choose from – the Standard plan, which costs $13.99/month via your Apple account.

Telstra customers, meanwhile, can sign up directly from their Telstra account page, adding any of the BINGE plans to their monthly Telstra bill for added convenience.

Is BINGE the Same as Foxtel?

While BINGE is owned by the same group of companies that owns Foxtel, and has access to the Foxtel content library, it’s not the same thing at all. Foxtel is designed for people that prefer live TV delivered via channels – something that Foxtel’s excelled at for decades. When it comes to that live TV experience, Foxtel is still the best option, either via their satellite service (which includes 4K channels) or their streaming service Foxtel Now.

BINGE, on the other hand, is more like Netflix, where you pick and choose what you want to watch and stream it on demand. It means you don’t get the “channel surfing” experience of Foxtel, but if you’re more comfortable with the Netflix way of doing things, you’ll feel right at home.

What Devices Can You stream BINGE On?

BINGE was built by the same team that brought us Kayo Sports, and so it’s not surprising to see it available on a similar set of devices, led by the Apple TV (both HD and 4K models) which feature what’s arguably the best BINGE experience. Android TV devices (including Sony smart TVs and the new Google Chromecast with Google TV) are well supported as well – and of course, both iOS and Android phones and tablets have apps ready to go.

Other ways to get BINGE onto your TV include the native app for Samsung smart TVs (2017 or later) and Google’s older Chromecasts (except the original “stick” model). And let’s not forget the trusty Telstra TV, which has a BINGE app ready to roll.

More devices (and game consoles) are planned for the future, and of course you can always stream in any modern web browser on Windows and Mac computers.

How Much Data Does BINGE Use?

With a large number of Aussies now on unlimited data plans at home, the data usage of streaming services isn’t as much of an issue as it used to be – but still, BINGE uses less data than most thanks to its use of a highly efficient streaming format. That doesn’t apply to all devices just yet, but even the ones that use more data are unlikely to drain more than around 2.5GB per hour from your allowance.

Of course, mobile data is far more precious, so it’s a good idea to set the quality on your mobile device to SD if you’re worried about using too much data, especially with modern smartphones having full HD screens and a data appetite to match.

Downloading to mobile devices isn’t supported yet, but is a feature that’s planned for the future.

Is BINGE Better than Netflix?

If you’re after general entertainment, BINGE actually does have the edge over Netflix – especially when it comes to popular classic shows. And while Netflix has its massive library of Netflix Originals, BINGE has that secret weapon in HBO – shows that cannot be streamed anywhere else. Netflix modelled its foundation of Originals on HBO, and still can’t beat the HBO library for sheer quality. BINGE is also two dollars a month cheaper than Netflix!

Is BINGE Better than Stan?

With the HD plans of both costing the same $14/month, BINGE has that HBO edge as well as a breadth of general content that Stan, while doing an excellent job with the stuff they have the rights to, can’t quite match. Stan potentially wins in the movies department – especially if you’re into more arthouse-style options – but both these services deliver solid bang for the buck and way more to watch than you can find the time for.

Amazon’s streaming service has a lot more customers than it might otherwise, since it’s tied to the overall Prime program (which includes a range of benefits including free shipping on purchases). That’s not to say that Prime Video is bad – far from it. There’s plenty of excellent Amazon Originals and a ton of current and older movies and TV shows. There’s also a lot of bargain-basement content. Overall, the BINGE library beats Prime Video’s hands down, but if you’re someone who shops on Amazon a lot, you’ll want to pick up a Prime membership anyway – so you can enjoy both!

Is BINGE Better than Disney+?

Since Disney took back all their content to start Disney+ at the end of 2109, the only place to go for all things Disney, Marvel, Star Wars or Pixar has been Disney+ with its undeniably appealing $8.99/month price tag. BINGE can’t compete directly on Disney content, but at the moment has a massive advantage with an adult audience; Disney’s service has been very much family-focused. That’s about to change with the addition of Star to Disney+ this year, but we don’t yet know what content that will bring. BINGE’s extensive library of content is going to be hard to beat.

Summary: Get Ready to BINGE!

In a crowded market, BINGE has quickly become one of the most popular streaming options thanks to its huge library of content, its massive variety of shows and movies, and for keeping things interesting via constant additions of new content as well as a fun approach to the look and feel of their web site and apps. With access to a huge amount of content only otherwise available on Foxtel, BINGE is one of the best streaming bargains around.